The Top 14 Historical Sites in Vermont! 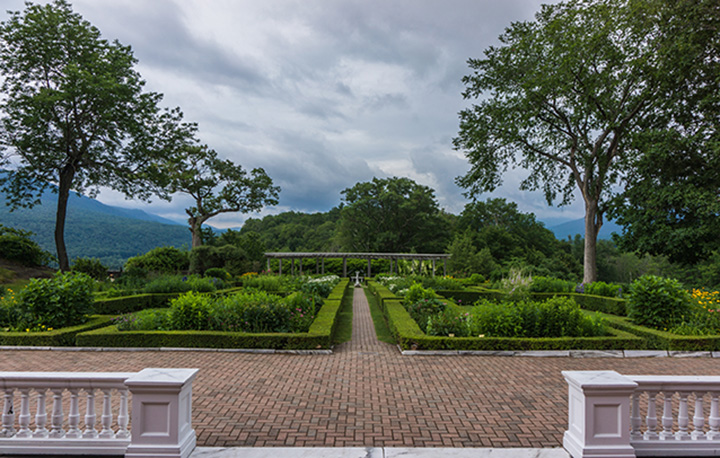 Vermont is famous for many things: Fresh air, skiing, natural resources, maple syrup, hiking, the Green Mountains...  But did you know that Vermont was one the first states to support gay marriage, a leader in the abolitionist movement, an early champion of women’s rights, and a sovereign nation for over a decade?  Vermont is a state rich in history and with fascinating historic sites. Explore these 14 for a peek into the past.

Plymouth Notch is a small unincorporated community in the town of Plymouth, that, by all accounts, has remained virtually unchanged since the early 20th century. It still features the preserved homes of Calvin Coolidge's family and neighbors, the famous cheese factory, the one-room schoolhouse where he went to school, and the general store where Calvin was born.

Chimney Point was once one of the most populated and strategic point in all of Vermont, with populations dating back 9,000 years ago. The Daughters of the American Revolution (D.A.R.) museum located there presents the story of how the early cultures of the Native American, French Colonial, British, and early American clashed. Claims to the land got so heated that at one point in history the existent settlement was burned down to nothing but the chimneys.

The rough-and-tumble Battle of Bennington (1777) was fought over a strategic munitions supply dump where the monument stands today. The monolith that marks the spot was completed in 1891 and, at over 306 feet, looms on a hill over the town in a stately sort of way. Comprised of blue-grey magnesium limestone, the monument offers guided tours, a gift shop, and jaw-dropping tristate views from the top.

The American Precision Museum in Windsor holds one of the largest collection of historic machine tools in the country. It also tells the story of a young man named Richard S. Lawrence, who moved to Windsor and started making guns in 1838.  Joining forces with another local gun-maker, the two started a company that eventually procured a government contract to produce 10,000 guns. Soon, they began experimenting with precision, interchangeable parts, which was a concept that would revolutionize manufacturing forever.

With the British laying claim to Vermont on one side and taxation from New Hampshire on the other, Vermont claimed its own independence in 1777 by signing its constitution at the tavern located in Windsor. Now known as the Old Constitution House, tours of the historic building are available Saturday and Sunday afternoons from late May through October, and special showings can be arranged.

Mount Independence was a strategic vantage point and fall back for the more notable, Fort Ticonderoga. During the Revolutionary War, the fort at Mount Independence was built as an answer to an anticipated attack from the northern part of Lake Champlain by the British. The site drove back the British in 1776, but it was ultimately taken by opposing forces the next year. Today, it offers walking trails on 300 acres that feature Revolutionary War artifacts.

Montpelier resident and nationally recognized architect, Ammi B. Young, built the original structure in 1833 using locally mined Barre granite. The dome was sheathed with copper and covered with gold leaf, and a statue of Ceres, Greek goddess of agriculture, was placed at the top. The building underwent a major restoration almost three decades ago and continues to be the functioning site of the state’s legislature. When not in session, the State House offers guided tours.

The Hildene was the summer home of Robert Todd Lincoln, Abe Lincoln’s son.  Built in 1905, it remained a Lincoln home until 1975. Today, it is a museum featuring a 400-acre estate, a Georgian revival mansion, 13 historic buildings, a working dairy farm, a goat’s milk cheesemaker, and a celestial observatory.  Guided tours are offered daily.

Rock of Ages, for all intents and purposes, was born in 1905, when manufacturer George B. Milne joined forces with quarry owners James Boutwell and Harvey Varnum. At just under 600-feet-deep, the quarry is still touted as the world's largest granite quarry, and, in 2004, the operational company opened a new, 5,000-square-foot building, with a new Visitors Center and Memorial Design Studio.

Founded in 1889 by industrialist Franklin Fairbanks, the museum houses 75,000 natural science specimens, 95,000 historical artifacts, and, perhaps most impressively, Vermont's only public planetarium. Live presentations of the cosmos and how it works happen throughout weekdays, and the site is listed in the National Registry of Historic Places. The neighboring athenaeum is a public library and gallery founded by Horace Fairbanks.

Lake Champlain has been a freshwater highway for hundreds of years, even before Samuel de Champlain first discovered it in 1609. Hundreds of vessels have sailed its waters, and many now sit at its bottom, preserved in her murky, frigid depths. With stories and images of over 300 historic shipwrecks, the Maritime Museum’s mission is to preserve artifacts and educate people about the history of Lake Champlain.

Northwest of town, the historic Brown Covered Bridge of spans the Cold River.  Built in 1880 by well-known Vermont bridgewright Nicholas M. Powers, the Brown Bridge features a lattice-truss design that was popular at the time. Carefully restored after Hurricane Irene, the bridge was named a National Historic Landmark in 2014 and cited as one of the “finest, least-altered examples” of lattice-truss in the U.S.

Designated a National Historic Landmark, Naulakha sits nested amongst pastoral rolling hills. Once the home of Rudyard Kipling for three years (1893-1896) the house saw Kipling pen “Captains Courageous,” “The Jungle Book,” “The Day's Work,” and “The Seven Seas.” Kipling named the house after a pavilion in Pakistan, and it is now owned by the Landmark Trust.

In 1960, the Morrill Homestead was declared a National Historic Landmark primarily based on its owner’s work on the famous Land-Grant Acts of 1862 and 1890. Senator Morrill sponsored legislation that would allow the American working class and minorities to access higher education opportunities. Morrill himself was pulled from school early and denied a college education because of his parents’ poor financial status.

158 Harmon Drive, Northfield, VT
The Sullivan Museum and History Center seeks to be a lively, compelling and anchoring presence in our community; to serve as a dynamic learning res... Read More

46 Barre Street, Montpelier, VT
The T.W. Wood Gallery mission is to preserve our artistic heritage and to bring the best of today's art to central Vermont. Read More

39 Main Street, Montpelier, VT
About Us: The first U.S.S. Montpelier was a German ship that was seized in 1917. It provided logistical services to the Navy by transporting troop... Read More

109 State Street, Montpelier, VT
About The award-winning Freedom and Unity exhibit presents a compelling history of the state from the first inhabitants to the present. Visitors w... Read More

One South Main Street, Stowe, VT
The Vision : The Museum tells the story of skiing in Vermont in an exciting and interactive way. It intends to house one of the most complete and i... Read More

4578 US Route 7, Pittsford, VT
A trip to Vermont is not complete without a visit to the New England Maple Museum! Nestled in the foot hills of the Green Mountains, the museum is ... Read More

900 Sherman Hollow Road, Huntington, VT
The mission of the Birds of Vermont Museum is to educate children and adults about the environment through the study of birds and their habitats. ... Read More

900 Sherman Hollow Road, Huntington, VT
Mission The mission of the Birds of Vermont Museum is to provide education, to nurture an appreciation of the environment, and to study birds and ... Read More

Brandon Museum at the Stephen A Douglas Birthplace