The 8 Best Wings in Vermont! 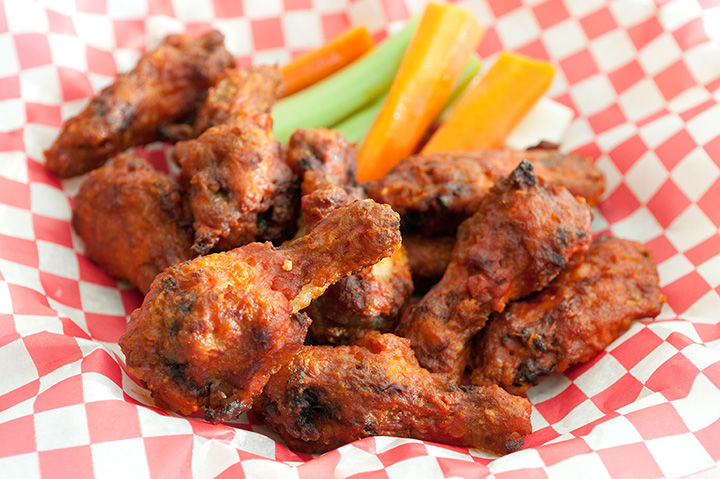 Not all chicken wings are created equal—some are far superior than others. And in Vermont, you can find many spots serving up superior chicken wings. It takes a true master to put together savory, crispy and tender wings. But in the Green Mountain State, there’s an abundance of places that do just that. Here are the 8 best places to get wings in Vermont.

The Bobcat Cafe and Brewery was established in 2002 by Erin and Sanderson Wheeler as a “social retreat” away from home and work. It quickly became well-known for its Misty Knoll Chicken Wings, house-made sauces (three chili, honey mustard, and apricot teriyaki) and dry rub options (garlic herb and spicy habanero). Plus, it has its own brewery with seven fresh draught offerings at any time, which, of course, pairs perfectly with great wings.

With their wings making Boston.com’s “New England’s Best Buffalo Wings,” list, RJ’s is the best of the best. That’s why Thursdays and Fridays are Free Wing Nights. Naturally, wings are always on the menu as well, and you can get a dozen wings (traditional or boneless) in the following flavors: El Espectro, spicy teriyaki, golden barbecue, Cajun, garlic Cajun, Kitchen Sink, and jerk.

Established in 2014 by two carpenters who love food, Hazel’s smokes all their meat in-house. This includes their chicken wings, which are locally famous in Southern Vermont. First, the wings are Applewood smoked, and then they are deep fried to perfection before receiving the house-made sauce of your choice—Buffalo, Asian, sweet barbecue, and more.

House-made salsa and sauces, flakey and fresh nacho chips, and house-smoked meats pretty much describe this Mexican eatery. Their wings are slow smoked, deep fried, and dressed with a sweet & spicy chipotle glaze that will knock your socks off. Plus, they source many of their products locally, which makes sense no matter how you slice it.

Established in 2011 by owners David Hall and Collin and Erin Sourdiff, Wicked Wings claim to fame is, yep, you guessed it, wings. Their house specialty is a dish named after the establishment that features 20 fresh chicken wings, which are deep fried, seasoned, dressed with a sauce or rub of your choice (there are over 20), and then finished over an open flame. The wings are so good that W2 opened an additional location in Essex in 2013.

Owner Taso Konstantonis has been serving up deep marinated, slow-cooked chicken for over a decade, and his casual eatery specializes in rotisserie and jumbo wings, as well as burgers and barbecue. The wings are freshly marinated, lightly floured, fried in pure vegetable oil, and served with a choice of 15 sauces.  You can order from six to 60-piece portions, and party platters are available.

Big Fatty’s is a hole-in-the-wall barbecue joint with a smoker and a single picnic table out front. Think downhome slow-smoked, fall-off-the-bone Texas brisket, pulled pork, wings, fried okra, collard greens, and homemade sauces and rubs, and you have about got it. Plus, Monday is Wing Night, featuring 50-cent wings in over 10 different flavors.

Established in 2011 by Chris Ferguson and Billy Mossinghoff and two others, the goal at Brewer is to provide great fresh food with unmatched service. What better way to do that than to smoke and cook all meats in-house—like the can't-miss teriyaki duck wings (duck drumettes tossed in homemade teriyaki sauce with mixed greens).