The 15 Coolest (and Most Unique) Hotels in Vermont! 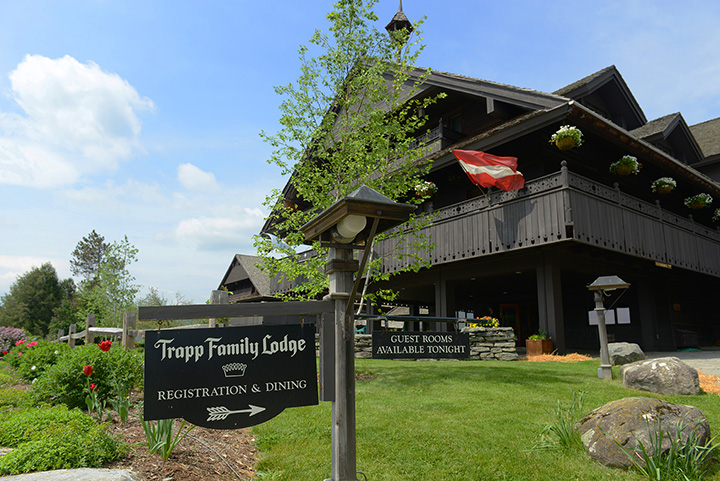 In the Green Mountain State, the word hotel can mean hotel, B&B, inn, barn, lodge, or house. The upshot, really, is that many of the hotels in Vermont are unique by nature. This list will hopefully provide a sampling of the acclaimed accommodations the state can offer. Here are our 15 favorites.

The vision of world traveler and Vermont Governor (1912-1915) Allen Miller Fletcher, the property was purchased in 1897 and the building of an English Cotswold-style castle began. Built entirely of locally sourced stone, both the carriage house and the castle are listed in the National Register of Historic Places, and rooms feature claw foot tubs, brick fireplaces, and Tiffany lamps.

In 1910, $350,000 went into building the original Hotel Vermont where the America House once stood, overlooking the shores of Lake Champlain. The red brick facade symmetrically organized into three vertical bays with marble trim was a shining example of the Colonial Revival style popular at the time. Built in 2013, the Hotel Vermont was born again. It features six floors, 125 rooms, the lobby opens up into the Juniper Bar as in times of old.

By the early 1900s, the Webb farm became known for its innovative practices.  Now, the original buildings have been preserved and rehabilitated, and Shelburne Farms became a National Historic Landmark in the early 21st century.  The Inn offers 24 guest rooms, four guest cottages, a public restaurant, agricultural classes, and 1,400 acres of pastoral farm land.

Situated on 370 acres in the middle of the Green Mountain State, Sterling Ridge Log Cabin Resort is, you guessed it, a log cabin resort. Idyllic countryside and secluded cabins are features you will find here, along with a 14-acre pond open to boating or fishing. Twenty-three log cabins and the larger units overlook Mount Mansfield and the resort has been featured in Field & Stream and Log Home Living magazine.

Offering 45 rooms across three buildings, the Equinox offers valet parking, morning fresh brewed coffee, fitness facilities, resort amenities, a professional golf course, and proximity to designer outlets. Called the Marsh Tavern during the American Revolution, in 1780 an inn was built next door. Named for the Equinox Mountain at its back, the inn one supported 200 guests.

Built by four Greek brothers in 1938 to commemorate their father, Demetrius, a Greek immigrant, the Latchis Hotel and Theatre features a unique Art Deco design that was meant to remind Demetrius of his home. It is reportedly one of only two Art Deco buildings still functioning in the Green Mountain State.

In 1929, Colonel Wheeler renamed the 1849 Grafton House to the Hotel Coolidge after his friend Colonel John Calvin Coolidge, the father of President Calvin Coolidge. Hand-painted murals from the 1950s adorn the Vermont Room and the Cocktail Lounge, and the hotel offers a deep connection to past.

A collection of 10 cabins laid out in the vintage 1940s style, the Casablanca Motel reminds one of going to a drive-in movie: It is a step back into a simpler time. Relax on your private porch overlooking the Battenkill River, fire up some steaks on the BBQ, or toss some horseshoes, and watch time pass.

Built in 1960, it is touted as being the first lodge in the areas, and, with views of Killington Peak and the surrounding Green Mountain, it is easy to see why this was location picked. The lodge features antiques in the hallways, fieldstone fireplaces in common areas, an Irish pub, a large hot tub, two swimming pools, and clay tennis courts.

In 1974, Thurston Twigg-Smith (American businessman) acquired the property previously owned by Sinclair Lewis and launched a bed and breakfast, later to be featured in Forbes Travel Guide. The properties now accommodate 20, and amenities include an on-site spa, first-class dining, and 300 acres of blissful tranquility.

After fleeing Austria and Nazi occupation in the 1930s, the von Trapp family, made famous by the film, “The Sound of Music.” They eventually settled in Vermont and, in 1980, their home was rebuilt as the new Trapp Family Lodge, a 96-room alpine lodge sitting on 2,500 acres. Still owned and operated by the von Trapp family, the lodge features European-style accommodations and cuisine.

With seven rooms, complete with air conditioning, a fireplace, and a hot tub, the Four Columns sits on 138 bucolic wooded acres. Established in 1965, the pond was traditionally stocked with trout, the garden planted with vegetables and herbs, and game birds, chickens, and pigs were kept on site. The hotel still offers a lovely farm-to-table restaurant, and a spa and cross country skiing round out the amenities.

Built in 1903 and originally the home of Albert Farr, a wealthy banker, this massive mansion sported three wings and cost $75,000. In 1991, the estate became known as The Lilac Inn, a romantic spot that caters to couples and weddings as large as 250 people. The inn is dog friendly and offers a dozen roses, a box of Lake Champlain Chocolates and bottle of Methode Champenoise for to anyone who wants to make romantic getaways out of their two-night stay.

Established in the early 1850s, the Pitcher Inn was once a simple country Inn for weary mountain travelers. Rebuilt after a fire in 1993, today's Pitcher Inn offers two-bedroom suites and nine guest rooms. The Chester Arthur, for example, is a mix of Victorian and neoclassical—reportedly the choice of the president when he redecorated the White House.