The 9 Best Seafood Restaurants in Vermont! 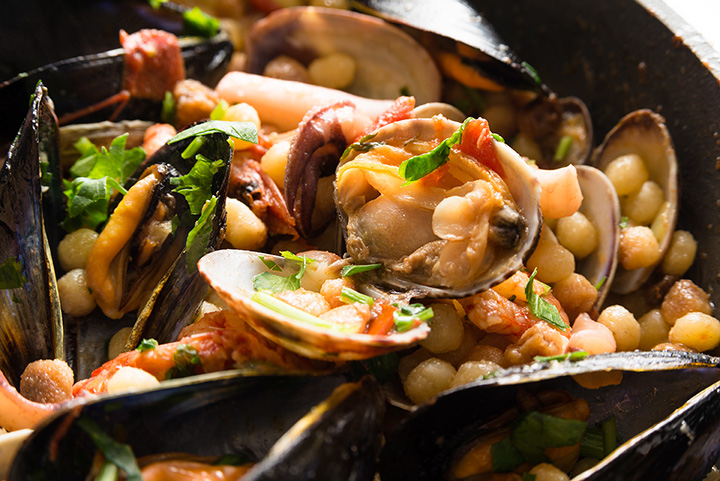 Discounting the fact that Lake Champlain is connected to the St. Lawrence River, which, in turn, connects to the Atlantic Ocean, you won't find a single lobster or haddock bubbling along any of its lakes. The upshot is that distribution has gotten amazingly sophisticated, and the Green Mountain State routinely calls on its close neighbors for some of the sea's best bounty. Here are the 9 best seafood restaurants in the state.

Established in 1977 with a commitment to offering the best steaks, prime rib, and seafood in Burlington, the Windjammer Restaurant has been doing it right for more than 30 years. The menu features classic, creamy New England clam chowder, Lobstercargot (lobster meat, Manchego cheese, and crostinis), and crispy fried calamari for starters. It then moves to scallops, salmon, haddock, or lobster tails for the main course. Of course, you could just go all in, get the Broiled Seafood Platter, and have it all. Either way, you’ll be happy, happy, happy.

Featuring locally sourced seafood and American-style dishes in a comfortable setting overlooking Lake Champlain, Chef Doug Paine celebrates each dish’s connection to the water. Sourcing the local seafood of the morning, Doug contacts regional farmers and fishermen, from Montreal and the St. Lawrence Region as well as from the New England coast and the Maritimes, to source the best catch for his menu.

Claiming to be Vermont’s first fish market, Ray’s Seafood Market has been family owned & operated since 1951. Now, with an adjoining restaurant, get homemade seafood & clam chowders, live lobsters, fresh shellfish, clams, shrimp, scallops, haddock, sole, and more. Order it swimming, and get it served to your table broiled, grilled, or fried. Get Lake Champlain perch or even fresh catfish only at Ray’s.

In operation since 1938, you can eat in or drive through at the Tozier take-out window. With giant picture windows revealing picturesque views of the mighty White River, favorite food items include Fresh Ipswich Seafood, Tozier's lobster rolls, and their famous New England clam chowder. And that's just for starter. Their main dishes include fried seafood, seafood & pasta, and surf & turn, based on the freshest catch of the day.

Jeff’s Maine Seafood started out as a retail seafood truck in 1979, selling fresh-catch three times a week. The business eventually became a restaurant, but the emphasis on fresh seafood never changed. Get oysters on the half shell, fish chowder, or PEI mussels for an appetizer and swordfish, tuna, salmon, or lobster as your main.

Located in Wilmington’s Historic District, the Anchor was named in Yankee Magazine’s Best of New England Top 10 Reader’s Choice picks. Featuring New England seafood, including lobster and shellfish, The Anchor also offers steaks and chops. You can dine in on two floors or experience or dinner al fresco on their outdoor porches. Maybe pop over to the marble and oak barroom with a full menu, bar specials, Vermont microbrews, and high-definition flat screen televisions.

Established in 1983, The Marina offers casual dining featuring seafood & steaks served are in a bright space with a deck featuring panoramic views of the mighty Connecticut River. Most items on the menu are locally sourced (New England), and specialties include the lobster and scallop pie (lobster, scallops, mushrooms, butter-cream sauce, puff-pastry) and the New England haddock (haddock, garlic, white wine, panko-butter topping).

This longtime family-friendly joint serves dishes made from scratch. Promoting a casual atmosphere, Harry’s has been around a while, but that does not mean the food is old and tired. Check out the appetizers—shrimp in crisp skins (cilantro and garlic-marinated shrimp inside a fried wonton wrapper), pan-fried crab cake with buttermilk ranch dipping sauce; green curried mussels and fresh basil—and if that makes your mouth water just wait until you read the dinner menu.

Locally owned and operated, the Lighthouse specialties include lobster mac & cheese, lobster risotto, sesame yellowfin tuna, and shrimp & scallop scampi.  Find favorites, too, like coconut shrimp, calamari, and oysters on the half shelf for starters. Then take on the haddock, lobster, shrimp, or scallops as an entrée.