The 11 Best Museums in Vermont! 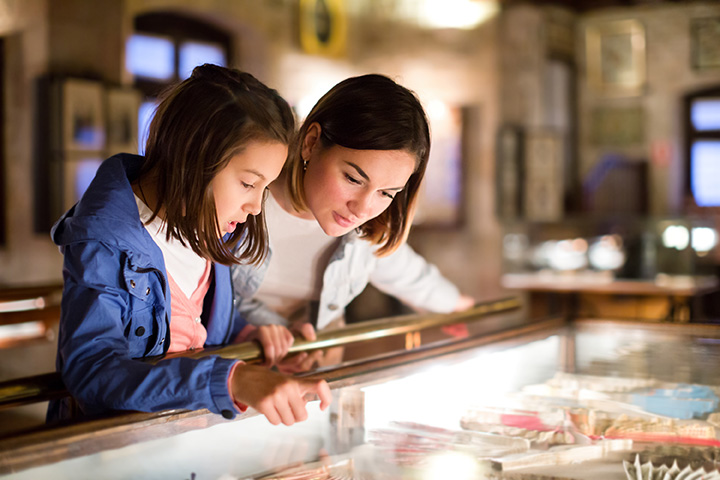 Vermont is widely regarded for its natural beauty and Yankee charm. However, despite its rustic image, Vermont is a surprisingly sophisticated little state. Since it’s long been a haven for the arts, perhaps it’s not too surprising that Vermont is also chock full of museums. In fact, Vermont boast 48 museums for every 100,000 residents. That’s the most museums per capita in the entire nation! With so many museums scattered around the Green Mountain State, it shouldn’t be a problem finding one that calls to you. From museums that focus on traditional and folk art, to museums that explore the state’s heritage, to hand-on science centers and fly-fishing museums—Vermont’s got a little bit of everything. Let’s take a look at these 11 great Vermont museums.

If there were some museums you’d expect to find in Vermont, this is probably one of them. Nonetheless, the New England Maple Museum is a beautiful and worthwhile place to visit. Here you can travel back in time, taking in live demonstrations, exploring artifacts and photos, and learning how Native Americans first discovered the thick syrup that would eventually become one of Vermont’s staple exports. The sweet aroma that hangs in the air is reason enough to stop by.

Have you ever wondered how the Union manufactured enough guns to arm the entire army during the Civil War? The American Precision museum holds the answer. Housed in the original Robbins and Lawrence Armory that manufactured many of these guns, the American Precision Museum is a tribute to a golden era of American manufacturing, an era of wood and steel. The museum houses the largest collection of historically-significant machine tools, tools that helped shape our country. Another exhibit explores the manufacturing process that would later be known worldwide as the “American System.”

Along with maple syrup, fly fishing is commonly associated with Vermont. The state’s clear, cool streams are a trout fisherman’s dream. Fly fishing is considered both a sport and an art, and this museum, housed in a stately colonial building, is a complete tribute to the pastime. The museum’s exhibits and artifacts document the rich history and evolution of fly fishing. Even people who don’t fly fish will find something to love in this beautifully-curated space. The museum even has tackle owned by some of the sport’s most famous devotees, including Ernest Hemingway, Babe Ruth, and Dwight Eisenhower.

The Shelburne Museum is surely the largest and one of the more popular museums in Vermont. Nestled in the Champlain Valley, this museum is more of a campus. Visitors can walk the grounds and explore its many buildings, containing an eclectic array of exhibits, including horse-drawn carriages, circus memorabilia, textiles, folk art, and impressionist paintings. Admission fees cover two days, so you’ll have plenty of time to explore.

The Bennington is a wonderful little museum that has been recognized by The Boston Globe and The Wall Street Journal. The highlight of this museum is its large collection of paintings by legendary folk artist, Amy Mary Robertson, better known as Grandma Moses. Her paintings, depicting rural, “old timey” New England, are quintessential to the Vermont experience. After viewing the exhibits, you can enjoy a peaceful walk along the George Aiken Wildflower Trail, which begins on the grounds of the museum.

The Museum of the Creative Process, Manchester, VT

This museum is unconventional. Housed on a large, beautiful, farm-like setting, The Museum of the Creative Process explores creativity and its effect on conflict resolution. The museum hosts workshops on emotional education and has a mix of travelling and permanent exhibits. The sculpture trail is one of the more popular. With exhibit like “The Panels of the Wizard of Oz: The Integrative Potential of the Process,” this is a heady space that defies categorization.

Ethan Allen, who many call the father of Vermont, has become a folk hero. This backwoods statesman lead the famed Green Mountain Boys, who took Fort Ticonderoga during the Revolutionary War, and was one of the earliest settlers in the Burlington area. In his small home, you’ll get a sense of frontier colonial life and witness some of the daily tasks and skills that were essential to survival. Some of Allen’s philosophical writings are also on display here.

This unique museum is a hidden gem. The Old Stone House was originally built by the nation’s first African American college graduate, Alexander Twilight, as a dormitory for the Orleans County Grammar School, where he served as headmaster. The granite structure is perfectly preserved and full of artifacts, including artwork, photographs, pottery, and housewares. Other small, historic buildings and barns are scattered around the beautiful grounds. In Vermont Life Magazine, writer Howard Frank Mosher called the Old Stone House “one of the last best places, anywhere.” Part agricultural museum, part Vermont heritage museum, and part architectural wonder, the Old Stone House is a must see for anyone visiting northern Vermont.

Skiing and snowboarding are ingrained into Vermont’s cultural heritage. This museum, housed in a beautiful old town hall, aims to celebrate this heritage by creating “visually stimulating, historically in-depth exhibits.” The museum boasts an impressive collection of ski equipment and clothing, fine art, and archival materials. The “10th Mountain Division” exhibit is a fascinating tribute to the rugged mountaineers who fought the Nazis, during World War II, in high-altitude areas like Switzerland and Norway. The museum also features a hall of fame honoring legends and pioneers of the slopes.

The Montshire Museum is the perfect place to take the family for a day of exploration and discovery. The museum is primarily hands-on and includes over 140 natural and physical science exhibits. The 110-acre, park-like campus sits along the shores of the Connecticut River, and since many of the exhibits are outdoors, it’s a great choice during the warmer months. Kids will love the hands-on learning and live animal exhibits. Highlights include the honey bee and leafcutter ant exhibits. There is enough here to keep your entire family busy for hours.

This ramshackle museum, housed in an unassuming barn that looks more like a roadside attraction, examines and explores the seemingly mundane, often neglected objects that dominate our daily existence. You’ll find no paintings, sculptures, or glass cases here. Instead, you’ll find exhibits dedicated to items like the toothbrush or the pencil. As strange as it sounds, the Museum of Everyday Living is fascinating and thought-provoking. Their current exhibit entitled “Mirror/Mirror,” examines mirrors as objects of truth and illusion, or as their website explains, objects of “dizzying intoxication and heartbreak.” The Museum of Everyday Life is a meditative experience. If you’re feeling like something a little different, something a little out there, this is the place for you. Remember to turn off the lights when you leave.

158 Harmon Drive, Northfield, VT
The Sullivan Museum and History Center seeks to be a lively, compelling and anchoring presence in our community; to serve as a dynamic learning res... Read More

46 Barre Street, Montpelier, VT
The T.W. Wood Gallery mission is to preserve our artistic heritage and to bring the best of today's art to central Vermont. Read More

39 Main Street, Montpelier, VT
About Us: The first U.S.S. Montpelier was a German ship that was seized in 1917. It provided logistical services to the Navy by transporting troop... Read More

109 State Street, Montpelier, VT
About The award-winning Freedom and Unity exhibit presents a compelling history of the state from the first inhabitants to the present. Visitors w... Read More

One South Main Street, Stowe, VT
The Vision : The Museum tells the story of skiing in Vermont in an exciting and interactive way. It intends to house one of the most complete and i... Read More

4578 US Route 7, Pittsford, VT
A trip to Vermont is not complete without a visit to the New England Maple Museum! Nestled in the foot hills of the Green Mountains, the museum is ... Read More

900 Sherman Hollow Road, Huntington, VT
The mission of the Birds of Vermont Museum is to educate children and adults about the environment through the study of birds and their habitats. ... Read More

900 Sherman Hollow Road, Huntington, VT
Mission The mission of the Birds of Vermont Museum is to provide education, to nurture an appreciation of the environment, and to study birds and ... Read More

Brandon Museum at the Stephen A Douglas Birthplace