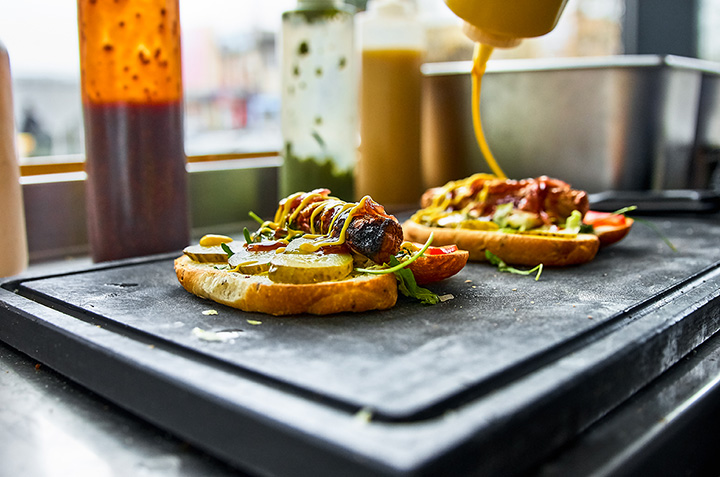 In the Green Mountain State, you don’t have to travel as far as you might think to get a delicious dog done right. After all, with purveyors of fine meats like Vermont Smoke and Cure and McKenzie’s, supply is always close at hand. That, paired with mobile food carts serving up the finest franks, Vermont has no shortage of excellent hot dogs. Here are the 6 best.

Hound Dogs’ food truck has more positive reviews than you can shake a wiener at, so they must be doing something right. Three main items round out Neil Schulman's menu: Hot and sweet sausages subs, Philly cheesesteak with or without the works, and hot dogs any way you like them. The iconic red food truck opened its doors in 2009 in an abandoned parking lot in Manchester Center, and Schulman hasn’t looked back... or changed his menu much, for that matter.

Established in 1944 inside of a retrofitted school bus, this seasonal food truck is parked in Battery Park on the waterfront of Lake Champlain from April to October. It features McKenzie natural casing franks and Koffee Kup Bakery bread (both popular local Burlington suppliers). Beansie's features only two delicious dog selections, the Michigan, a steamed dog with a homemade hamburger meat sauce, and the Virginia, a steamed dog wrapped in bacon.

They might not serve dogs here, but they sure know how to make them. The Vermont Smoke and Cure bacon dog consists of uncured antibiotic-free and gluten-free bacon and beef stuffed into natural lamb casings. The magnificent mixture of meat is then maple and cob-smoked to perfection, which means the best dog in Vermont might just be on your grill at home.

Al's French Frys was established in the late 1940s by Al and Genevieve Rusterholz, and there is still no better place to get an old fashioned American dog and fries in all of Burlington. Whether it is a corn dog with fries, a cheese dog with fries, or a chili dog with fries, at Al’s you never have to ask for fries with your meal.

Earl and Flora Handy decided to open a diner 1945 and three generations of Handy’s have been serving up home-style breakfasts and lunches ever sense.  One the mainstays that helped put Handy’s on the map for is their “famous” Texas hot dog, which is essentially a home-style, slow-cooked chili dog with all the fixings.

The best place in Vermont to get a dog might be at a Vermont Lake Monsters (Major League Baseball Single-A affiliate) game. Games feature McKenzie natural casing franks sold onsite at Hot Dog Heaven, and 25-cent dog promotions pop up at intervals throughout the summer. So have a wiener with Champ and help celebrate summertime in the Green Mountain State.