The 8 Best Breakfast Places in Vermont! 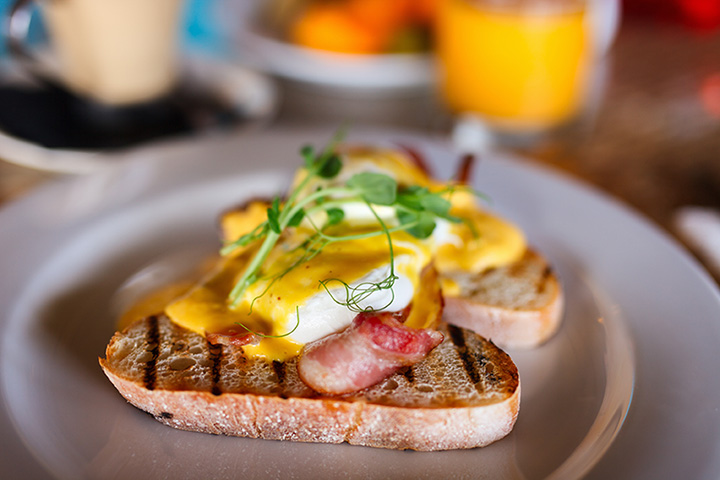 There is something about a hearty New England breakfast that sets you right for the long day ahead. And in the Green Mountain State, the best breakfasts are often the simplest— no frills, just good, honest, local food served up by a skilled cook at an American hometown eatery. Here are our favorite spots to grab breakfast in Vermont.

Opened in 1990 by Alison Lane and Andrew Silva, both graduates of the New England Culinary Institute, Mirabelles has been serving rocking breakfasts and sweet treats in Vermont’s Queen City for over two decades. In addition to offering their kicked up variation on a breakfast sandwich, some local menu favorites are the brioche French toast, the Breakfast Tostada, and the Popover Breakfast (scrambled eggs, smoked salmon, and a lemon-shallot crème fraîche).

The turquoise, black, and chrome and decor, over-sized counter, and dining booths make you feel as if you have stepped into a Bogart film, and the diner's menu jacket informs you that "in 1948, [the diner] was shipped and assembled on its present site." Besides being a part of Americana, Benn serves breakfast all day, including omelets and pancakes of countless varieties, turkey hash, homemade sausage, multiple chilies, and more.

Bob’s Diner serves up breakfast and lunch and seven days a week inside of a Silk City replica 1950s diner. Breakfast is fast and cooked to order, featuring breakfast sandwiches and nine other egg dishes, including home-style corned beef hash with two eggs and hollandaise. Also, Bob’s offers over 20 pancake, waffle, and French toast dishes, and 10 omelet dishes. Don’t forget about the hometown hospitality, the real Vermont maple syrup, and the free coffee refills, too.

The so-called “best-kept secret in the NEK,” Miss Lyndonville has been around since forever. It has always offered a bevy of all-you-can-eat specials in addition to a basic but well-executed menu. Portions are hefty and affordable and feature comfort food dishes that will stick to your ribs on a cold winter day, like the country home-fry casserole, the homemade cinnamon French bread toast, and the country fried steak breakfast. Served all day long by a cheerful and attentive wait staff, breakfasts come with real Vermont maple syrup.

With delicious and unique breakfast offerings served all day long—chorizo & egg tacos, gingerbread pancakes, and their signature Penny Cluse (two eggs any style, homefries & biscuits with herb cream gravy)—Penny has been offered hometown favorites on the corner of Church Street for almost 20 years. Opened by Charles Reeves and Holly Cluse in 1998, the cafe was named after Holly’s childhood dog, Penny.

You have got to love a breakfast spot that serves Vermont maple syrup with your meal and upcharges for the fake stuff. Sugar & Spice is part of the Ripley estate, where Brigadier General Edward H. Ripley, who served as commander during the Civil War, once lived. Their pumpkin pancakes are famous in the Green Mountain State, and they make their own maple syrup on site. In addition to the pancakes, you might enjoy the maple walnut waffle with ice cream, or the pork sausage wrapped in golden pancakes referred to as “pigs in a blanket.”

Bloody Marys and mimosas are featured next to coffee on the menu. Need we go on?  Well, with 12 styles of pancakes and waffles to choose from, not including rotating specials, what you see is what you get at Johnny’s. Specials like homemade corned beef hash, blueberry cream cheese French toast, and a local pork, egg, and cheese sandwich, make Johnny’s a spot worth checking out.

The Chelsea is a vintage 1938 Worcester Diner, serving breakfast all day long. The breakfast menu features fresh, “backyard” eggs from their own farm chickens, homemade sausage gravy, pancakes, Belgian waffles, eggs benedict, char-grilled sirloin and eggs, and their signature dish, the Cajun skillet breakfast. Maybe even try some of their homemade ice cream in the A.M... hey, why not?